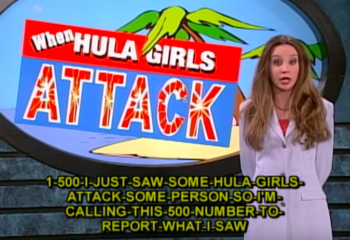 A phone number is much longer than a real phone number, or noticeably longer than other phone numbers given at the same time. The entire number may be listed or the audience may simply see a character dialing far more digits than would be reasonably expected without seeing which digits they are. Sometimes the number will be an international number and the extra digits are presumably country and area codes, but more often than not no explanation is given.

Sort of Truth in Television: To dial on a public phone from Tokyo to Guadalajara, Mexico, for example, you have to dial 0041-010-52-33-XXXX-XXXX, where 0041 is the long distance carrier,note In this case, Softbank, and this prefix is actually optional, though it's usually not recommended to omit it for the reason shown below. 010 is the international long-distance code,note If you chose to omit the carrier selection prefix, you will be connected through the default carrier for your phone company, usually NTT, which is well known for its extortionate rates. 52 is Mexico's country code, 33 is Guadalajara's city code, and XXXX-XXXX is the local phone number. Also, any extra digits are ignored once you've finished dialing a full valid number, so sometimes harmless extra letters are tacked on to a mnemonic (i.e. 1-800-BUSINESS-NAME).