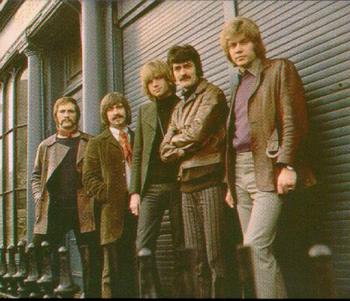 The Moody Blues in their heyday. From left to right: Mike Pinder, Graeme Edge, Justin Hayward, Ray Thomas, and John Lodge.
Cold-hearted orb that rules the night
Removes the colours from our sight
Red is grey and yellow white
But we decide which is right
And which is an illusion
— Mike Pinder's spoken word passage from "The Late Lament"
Advertisement:

The Moody Blues are a Long Runner Psychedelic Rock/Progressive Rock band from Birmingham, England, founded in 1964.

Ray Thomas, John Lodge, and Mike Pinder had all been members of various amateur bands before Lodge left to go to college. The remaining two recruited band manager-turned-drummer Graeme Edge, guitarist Denny Laine (real name Brian Hines; later of Wings) and Clint Warwick (real name Albert Eccles) on bass to form the Moody Blues.note  There is some disagreement on the origins of the name; they called themselves the M&B Five in the hopes of getting local brewers M&B (Mitchell & Butler) to book them into their client pubs in and around Birmingham, and when that didn't pan out, Mike Pinder claims that he was inspired by Duke Ellington's "Mood Indigo" to turn the initials "MB" into "Moody Blues". However, Denny Laine is equally convinced that he was the one who came up with the name since they were, at the time, a blues band and he had a moody onstage persona. Originally, they were mostly a white R&B band in line with most of The British Invasion bands of this period. Under a recording contract with Decca Records, they first had success with the single "Go Now" (originally written by Larry Banks and Milton Bennett and recorded by Banks' then-wife, Bessie Banks), which was a top 10 hit in the United States and, in fact, remains their only #1 single in the UK. Their debut album The Magnificent Moodies was released in 1965, but they had trouble following the success of "Go Now" with an additional hit, and in 1966, Warwick and Laine left.

Warwick was briefly replaced by Rodney Clark, but it didn't last, and their best-known line-up formed when Pinder, Thomas, and Edge reunited with Lodge and joined up with guitarist Justin Hayward of the Wilde Three. This line-up released two more singles, "Fly Me High" and "Love and Beauty", which also found little success. However, the latter was a definite move towards their classic sound, featuring the symphonic sounds of Pinder's Mellotron and using Thomas' flute as more of a featured instrument. From here on, the Moodies would become a full-blown Psychedelic Rock band.

Their contract with Decca was set to expire, but the label offered them a deal to promote their new "Deramic Stereo Sound" audio format, and its associated Deram Records label, with a rock version of Antonín Dvořák's New World Symphony. They were unable to complete this but convinced Peter Knight, who had been hired to conduct the orchestral material on the abandoned project, to continue working with them (providing overtures, conclusions and orchestral linking sections between songs) on a recording that would blend rock music with symphonic sounds, in the structure of a Concept Album about a day in the life of an everyman. The resulting album, Days of Future Passed (1967), was a sales success, mostly on the back of Hayward's Top 20 single "Nights in White Satin" (and, in America, the #24 placing of "Tuesday Afternoon"). Special note must be made of Pinder's contributions: he and producer Tony Clarke removed the sound effects tapes from his mellotron and doubled up the orchestral tapes, combining with Pinder's skills on the mellotron to create a symphonic "wave" sound that would become a defining characteristic of their work. Its concept album structure is also a huge influence on Progressive Rock.

The three following albums, In Search of the Lost Chord (1968), On the Threshold of a Dream (1969, which was their first UK #1 album) and To Our Children's Children's Children (1969, another Concept Album inspired by the then-recent moon landing), were also successes, featuring several more hit singles, and lacked the full orchestra, instead relying on the mellotron. However, this full, symphonic sound, heavily reliant on overdubbing, was too difficult for them to reproduce live, so they stripped down their sound a little more for 1970's A Question of Balance and 1971's Every Good Boy Deserves Favour, which were also huge successes, the former yielding a #2 hit in "Question", and they and the final album in their classic period, 1972's Seventh Soujourn, all produced several Top 40 singles. However, five years of touring and recording had taken their toll on the band, and they felt they were running out of ideas. They eventually went on hiatus and would not record for another five years.

The band got back together in 1977 to record a new album, Octave. However, Pinder had married and started a family in the interim, so he declined to go on tour with them. Besides this, there was a fire at the studios they were using, and a landslide after rain marooned them in Pinder's home where they were using his home studio, causing tension to rise. Eventually, Pinder left, and on tour, he was replaced by Swiss ex-Yes keyboardist Patrick Moraz. Their follow-ups, Long Distance Voyager (1981) and The Present (1983), were also successful, but they lacked their trademark lush, symphonic mellotron-led sound, replaced with a more modern feel. Similarly, Hayward, who had also been the primary composer of their hit singles including "Nights in White Satin" and "Question", was forced by marketers to have one of his songs lead off each album, and they were now more aimed at getting radio airplay. With Hayward and Lodge now acting as the primary composers, Ray Thomas was being pushed off to the side, and because of all of this, the quality of their albums suffered from this point onwards, particularly in Pinder's absence.

The band enjoyed a boost in commercial fortunes with their 1986 album The Other Side of Life and another Hayward tune and U.S. Top 10 single, "Your Wildest Dreams". Unfortunately, this and their followup, 1988's Sur La Mer, are probably their weakest albums yet - producer Tony Visconti and synth programmer Barry Radman were introducing the use of sequencers, samplers, and drum machines in order to remain contemporary in the musical climate of the '80s, pushing the Moodies towards boring, anemic Synth-Pop. Hayward and Lodge's compositions were becoming increasingly lightweight and not as deep musically, and since the music they were producing did not fit at all with a flute, Thomas continued the process of becoming a Lesser Star (going so far as to be mixed out of Sur La Mer entirely, though this was partly due to illness). While these albums and 1991's Keys to the Kingdom remained good sellers, critics were bashing the Moodies by this time, and Moraz was expressing dissatisfaction with being in the band, eventually leaving in 1991. The other members continued on as a four-piece, supported by live keyboardists.

Faced with critical maulings and a lawsuit from Moraz in 1992, the Moodies took a hiatus from recording, instead continuing to tour. This time, they performed with an orchestra, finally allowing them to fully recreate much of their early work on stage. Eventually they got back into the studio to record their latest all-original album, 1999's Strange Times. This was a huge improvement, cutting down on the 1980s excess and giving emphasis to guitars instead of keyboards, creating a pretty decent comeback. Thomas retired in 2002, and the band again continued as a trio of Edge, Hayward, and Lodge (with unofficial fourth member, flautist Norda Mullen), cutting their latest album, the Christmas album December, in 2003. Clint Warwick died in 2004 from liver disease. The Moodies continued touring until 2018. In December 2017, they were announced as inductees for the Rock & Roll Hall of Fame. Thomas passed away on January 4, 2018. Edge passed away on November 11, 2021. Shortly after Edge's death, Hayward revealed the band had quietly ceased activity in 2018.

"Can the poems, it's arse-whooping time!"