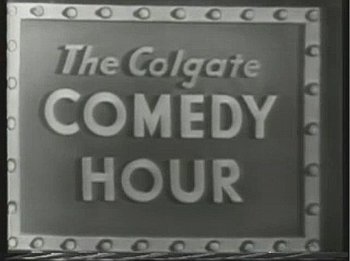 Dean: Max? So fly away? I don't get this.
Jerry: Well, your name is really Dean but I called you Max and I told you to fly away because Maxfli is the name of a golf ball and the sponsor doesn't want us to make any plugs.
Dean: We need the golf balls!
Jerry: Because we both play golf so send them to the house right away.
Dean: Maxfli!
Jerry: Oh, I can just see the sponsor now, squeezing all of the Colgate toothpaste out of the tube and he's screaming something awful!
Advertisement:

A live Variety Show that aired Sunday nights on NBC from 1950–55 and was hosted by a rotating group of entertainers. The title refers to the show's primary sponsor, Colgate-Palmolive. The November 22, 1953 episode was the subject of an experimental NTSC color television broadcast.

Some of the most famous acts of the day appeared either as hosts or guest stars, including Abbott and Costello, Martin and Lewis, Jack Benny, Bob Hope, Frank Sinatra, Ethel Merman, Jackie Gleason, Donald O'Connor, Charlton Heston, and Burt Lancaster.

Lasted 5½ years before going off the air due to competition from The Ed Sullivan Show on CBS. Jim Davidson's Classic TV Info website has a very nice episode guide