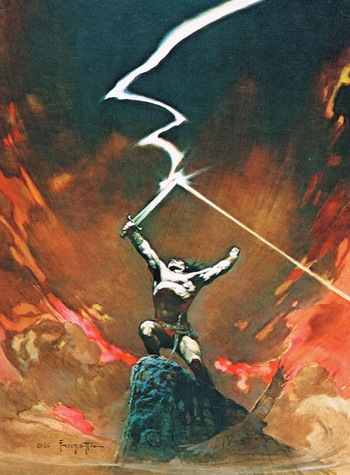 Frazetta finally tires of life on this boring shell of a world and Ascends to a Higher Plane of Existence.
"Frazetta's vision of Conan, as seen on the covers of the Lancer paperback collections of the 60s and 70s, became the definitive picture of the character."
— George R. R. Martin
Advertisement:

Frank Frazetta (born Frank Frazzetta; February 9, 1928 – May 10, 2010) was one of the most famous Fantasy Artists. He started in comics in the '50s and worked his way into movie posters and pinups. His most famous works include illustrations of Conan the Barbarian and John Carter of Mars.

Frazetta is notable not just for his artwork, but also for his savvy business sense: he was able to successfully negotiate to license the artworks he created, rather than sell them outright to his clients as was customary at the time. By the time of his death, the artwork he'd collected in his personal museum was worth several million dollars.