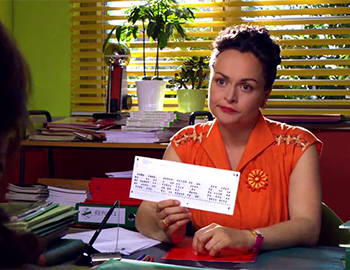 Britta: Okay, very mature. Which one of you filled in a butt?
Troy: They're boobs, not a butt. And I don't know.
— Community
Advertisement:

Optical answers sheets, known as Scantrons after the company which manufactures them, are a form used to record answers on multiple choice tests. The test-taker marks their answer on the sheet by filling in a small bubble. Afterwards, the answer sheet is fed through a scanner which detects the filled bubbles and automatically scores the test. This allows an administrator to grade enormous amounts of exams with little effort.

When a character is less than scholarly, or doesn't know the answer to any of the questions, they will color the dots on the page so that it resembles a 2-bit bitmap picture when viewed. Oftentimes the graphic is a phrase, or a funny or offensive image. Naturally, this will cause them to fail the test note The graphic generally requires them to fill in more than one dot per answer, or leave some answers blank, eliminating the minor possibility that they might coincidentally happen to fill in a box that corresponds to the right answer, or they could end up passing with flying colors.