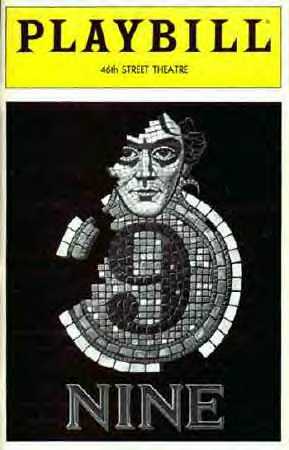 A 1982 musical adaptation of Federico Fellini's classic 8½. Nine was conceived by librettists Arthur Kopit and Mario Fratti, and songwriter Maury Yeston. The story is that of world-famous film writer/director Guido Contini (played by Raúl Juliá in the original Broadway production), a man who's facing a midlife crisis on many fronts as he turns forty. On one hand, he can't come up with a script for his latest film. On another hand, his marriage to his wife Luisa is on shaky ground. Factor in the other women in his life, including his mistress, his confidant and costume designer, his film star muse, and his mother, and Guido's got some issues.

Not to be confused with the "stitchpunk" animated film 9, which came out three months before Nine's film version was released.

This show and film feature examples of: