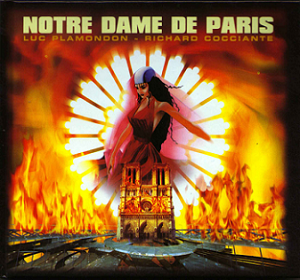 Notre-Dame de Paris is an enormously popular (as in, "played in Korea" popular) French-language rock opera created in 1998 by French musician Richard Cocciante and songwriter from Quebec Luc Plamodon.

It is an adaptation of the novel of the same name by Victor Hugo, better known in English as The Hunchback of Notre Dame. It originally starred Québecois singer Garou as Quasimodo and French singer Hélène Ségara as Esmeralda.