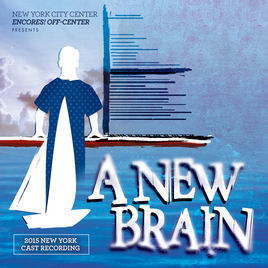 The cover art of the 2015 Encores! revival of A New Brain.
"All the songs I never wrote
Fizzle and remain
All the songs I did not start
All the rhymes I never made
All the stories I delayed in telling
Are welling up inside my brain
I should explain
I have so many songs!"
—Gordon Schwinn, "A New Brain"
Advertisement:

A New Brain is a musical with music by William Finn and book by Finn and James Lapine. The show is largely autobiographical, drawing from Finn's own experience with a condition called arteriovenous malformation. The musical is about a composer named Gordon Schwinn who has dreams of writing Broadway musicals but is currently stuck composing songs for a children's show star named Mr. Bungee, whom Gordon despises. While writing one day, he faints suddenly and is taken to the hospital where he is diagnosed with arteriovenous malformation, the same condition Finn had. He fears that if he doesn't survive the risky operation he must undergo, he will die without ever having reached his full potential as an artist. The cast consists of Gordon, his mother Mimi, his friend and agent Rhoda, his boyfriend Roger, a cruel-hearted nurse named Nancy D, a much kinder nurse named Richard, an unsympathetic doctor, and a minister.

A New Brain contains examples of: