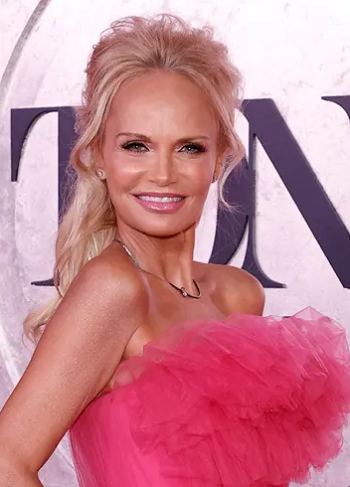 "Not everyone is going to like what you do or what you have to offer; however, if you can't see yourself doing anything else, and you have the drive and ambition, get the training and go for it."
Advertisement:

Kristin Dawn Chenoweth (born Kristi Dawn Chenoweth, July 24, 1968 in Broken Arrow, OK) is an acclaimed American actor and singer, known as "the tiny blonde with the powerhouse voice" and one of Broadway's reigning queens. "Cheno" is known among musical theater lovers as the original G(a)linda in the hit musical Wicked. Television audiences, on the other hand, know her as Olive Snook from Pushing Daisies, Annabeth Schott from The West Wing and April Rhodes on Glee.

She is also known for her Cheno Notes (extremely high soprano notes, well into the whistle range, sung in full head voice), for being 4 feet 11 inches, and for Les Yay-ing it up with Wicked costar Idina Menzel. Also a tiny but vocal Mama Bear to everyone in the LGBT community despite her deeply Christian upbringing, as this takedown of a writer attacking her co-stars

She was a guest judge on American Idol for the Orlando auditions. Awesome promptly ensued.

She wrote a 2010 autobiography, A Little Bit Wicked, and narrates the audiobook version (complete with cameos for major characters such as Aaron Sorkin).

She can do anything — literally anything. She is also a very Large Ham.

Kristin Chenoweth and her works provide examples of: