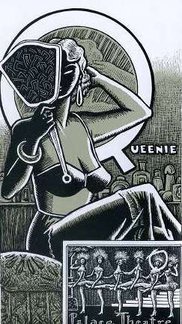 "Burrsie, I think we're about due for a party."note Illustration by Art Spiegelman
Queenie was a blonde, and her age stood still,
And she danced twice a day in vaudeville.
— opening lines of the poem and both musicals
Advertisement:

An epic poem by Joseph Moncure March, written in and about The Roaring '20s. In the story, two vaudeville performers, Queenie (a dancer) and Burrs (a clown) begin a lustful romance and move into a Manhattan apartment together. After a while, however, the lust wears off and Queenie decides to throw a party to shake things up. The guest list includes many colorful characters: Madelaine True, a lesbian; Dolores, a Mexican hooker; Eddie, a dim boxer and his even dimmer wife Mae; Oscar and Phil d'Armano, two flamboyantly gay brothers; Jackie, a bisexual dancer; and Nadine, a minor. Things start to get hot when Queenie's friend Kate arrives with a charmer named Black, who catches Queenie's eye and sparks Burrs' jealousy.

Considered extremely racy for its time, it wasn't allowed to be published until two years after it was written, and even then with only a very limited run (750 copies). The Wild Party was adapted into a poorly-received film in 1975 (which tried to work in elements of the Fatty Arbuckle scandal), and two musicals in 2000, one on Broadway (by Michael John LaChiusa) and one off-Broadway (by Andrew Lippa).

Lippa's version is closer in plot to March's poem and keeps the focus on the Love Triangle, and features modern pop/rock orchestrations. LaChiusa's departs from the original by fleshing out the Back Story and Character Development of the large cast, notably bringing aspects of March's poem "The Set Up" to boxer Eddie. This version incorporates many pastiches of the music and show business of The Roaring '20s.

Not to be confused with the 1956 crime film starring Anthony Quinn.