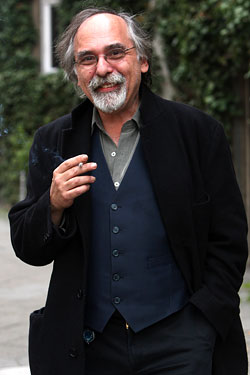 I thought he was supposed to have a mouse head?
Advertisement:

Art Spiegelman (born Itzhak Avraham ben Zeev Spiegelman, February 15, 1948) is a name that is highly familiar to readers of Maus. Not only is he the author and artist of the book, but he appears as a character in the book, mousehead and all. If it wasn't entirely clear to readers before, unlikely as it may be, well it bears repeating that it's all true. Art Spiegelman is the son of Vladek and Anya Spiegelman, Polish Jewish immigrants to America who had survived the Holocaust which claimed the lives of several members of their family including Rysio, their first son who would have been Art's elder brother by 10 years had he lived. The Spiegelmans arrived first in Stockholm, Sweden, where Art was born in 1948, and later arrived in America where they settled in Rego Park, New York.

The point is, anyone writing about Spiegelman has to contend with Spiegelman's own works since they are very autobiographical to the point of No Fourth Wall, right from his beginnings in Underground Comics and Alternative Comics, as well as his extended long narratives, Maus and the more recent In the Shadow of No Towers. Put it simply, while autobiographical and confessional comics had existed before Spiegelman, especially the works of Robert Crumb and Justin Green's Binky Brown stories, Spiegelman took them to another level altogether and changed the landscape of comics forever. To put it simply, he introduced a range of references from both High Art and Low Art. Experimental films, Pablo Picasso, Cubism, Abstract Painting as well as Philip K. Dick, pulp fiction, Raymond Chandler, newspaper comics and above all, Harvey Kurtzman, editor and writer of MAD and The Pioneer for the alternative tradition to traditional comics in American culture. Spiegelman was interested in pushing the boundaries of what comics could do and raise awareness of its capacities as an artistic medium and fine art comparable to movies, literature, and painting. Indeed, when the Museum of Modern Art created an exhibit in 1992 dedicated to High and Low Art the inclusion of artist Roy Lichtenstein, whose major works consisted of enlarged panels of comic books (without accreditation to original artists) but not any actual creations from comics artists, hit his Berserk Button and he parodied it in a New Yorker comic that made fun of the museum's Public Medium Ignorance and Small Reference Pools.

Spiegelman's most famous work Maus is, by his own admission, far more conservative than his radical underground comics first published in magazines like Short Order Comix as well as two magazines he founded and co-edited, Arcade: The Comics Revue (with Bill Griffith) and RAW (with Françoise Mouly, his wife). These pieces were often surreal featured bizarre Art Shift and all kinds of experimental touches that had to do with panel layout, juxtaposition, and collage. Pieces like Ace Hole: Midget Detective or Malpractice Suite are some of the weirdest, and it must be said, funniest, comics of its kind. Alan Moore later wrote that these pieces were among the most influential on his early work and he considered Spiegelman the most brilliant artist of his generation, they also influenced the experiments he would later undertake as a writer in his celebrated famous works.

Spiegelman is renowned not only as an artist of high caliber but also for his knowledge of comics and its history and outline. As a critic, he's published several pieces and given many interviews on different artists. For his college thesis in art school, at a time when no one was regarding comics seriously, he wrote a long study on the EC Comics' 8 Page strip, Master Race written by Al Feldstein with art by Bernard Krigstein. He also co-wrote a biography on Jack Cole, the creator of Plastic Man which is the only superhero strip Spiegelman admits to liking. Needless to say, Spiegelman's insistence on the seriousness of comics as a medium means that he has no tolerance for superhero comics and its ilk. Indeed he believes that Carl Barks' Donald Duck and Uncle Scrooge stories were far more sophisticated than the superhero comics of its day and afterwards. As an editor for Arcade and RAW, he provided a platform for a range of talented artists and innovative figures, introducing to American audiences, for the first time artists from Africa, Japan as well as obscure European talents like Mariscal, Francois Masse, and Jacques Tardi. He also provided a platform for underground comix staples like Robert Crumb, Justin Green, Kim Deitch as well as introducing new talents like Richard McGuire and Chris Ware. In this he was aided by Francoise Mouly, his wife who served as an innovative editor with an interest in self publishing, who could operate and print an issue on a press on her own. When Mouly was appointed as cover editor for the prestigious New Yorker magazine, Spiegelman was naturally invited to contribute as a regular cover artist. His covers for the magazine proved to be shocking, including a daring image of a Hasidic Jew and an African American Woman kissing after the Crown Heights Riots created tensions between New York's Jewish and African American communities. His most famous cover was the black on black silhouette of the Twin Towers that appeared on the magazine after the 9/11 attacks.

Of course, Spiegelman's most important work is Maus, which he regarded as a "monument to my father," an artistic challenge to represent the Holocaust and the justification of comic books as a medium fit enough to deal with such a subject. It became the first comic book or graphic novel to win the Pulitzer Prize and for many non comics aficionados brought the medium Out of the Ghetto from its rigid dominance by superhero comics. It would later be used as textbooks in many nations across the world. The fame of the work as well as the fatigue involved in producing it took its toll and Spiegelman did not contribute another long narrative until several years later with a regular comic strip In the Shadow of No Towers (2004) which was published first in the German newspaper Der Spiegel (It was rejected by the New Yorker for its political anti-Bush tone) before arriving in book form. It returns to the wild experimentalism of his '70s work with innovative layouts, gags, and humour describing his experience of 9/11 and his disgust and disillusionment with The War on Terror.