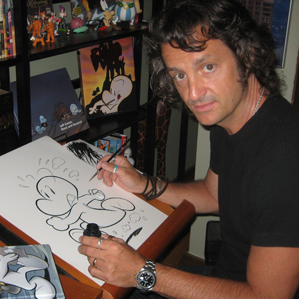 (born February 27, 1960) is an Eisner and Harvey-winning American writer, cartoonist and former animator, best known for the independent comic, BONE.

Born in Pennsylvania, raised in Columbus, Ohio, Smith grew up from an early age with an interest in cartoons and comics, most notably the work of Walt Kelly, Charles Schulz, Chuck Jones, Carl Barks and E.C. Segar. As he got older, he got a taste for the narrative complexity found in literature and film, most notably The Lord of the Rings, The Adventures of Huckleberry Finn, Star Wars and Moby-Dick, which is Smith’s all-time favorite book and is referenced constantly in Bone.

After graduating from Ohio State University (where he wrote and drew Thorn, a sort of first-draft comic strip version of Bone), he co-founded Character Builders, an animation company that specialized in commercials and credits openings. In 1991, he founded the comic book house Cartoon Books and that same year began to self-publish Bone, to critical and commercial success. He completed the 1,300-page epic in 2004 and released it all as one book, commonly referred to as the brick. That next year, Scholastic approached Smith with rereleasing Bone, this time in full-color.

Smith has also crafted other books, including Stupid Stupid Rat Tails and Rose, two supplemental books in the Bone universe, RASL, a Fantastic Noir about a universe-hopping art thief, the light-hearted Shazam! The Monster Society of Evil, the children’s book Little Mouse Gets Ready and the paleological adventure book, Tuki Saves the Humans.

Tropes Associated with Jeff Smith include: