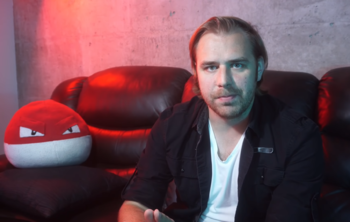 “Do you suffer from long-term memory loss?”
"Hey there folks, welcome to Spectrum Pulse, we talk about music, movies, art and culture."
Advertisement:

Spectrum Pulse is a web review show hosted by Mark Grondin, which started on his blog in 2012 and moved to YouTube a year later. He reviews albums of various genres, as well as the occasional movie review or top ten list, where he is usually accompanied by a plush Voltorb that contributes to the show by adding snarky bottom text to the reviews.

His other series include:

, his Billboard Breakdown channel is here

, his Patreon is here

, and transcripts of his videos can be found on his blog here

He is also a published author, with his first full-length novel To Kill A Dragon being published in November 2015.

This critic here provides examples of:

I've got the poll up here, so if you want to tell me how wrong this trope page is, here's your chance. Anything else this trope page can do to improve its presentation, I'm all ears. But until then: I'm Mark, you're watching Spectrum Pulse, and I'll see you next time.