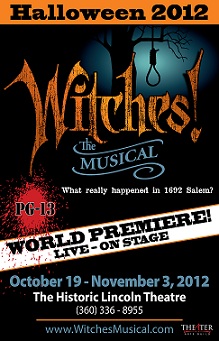 Witches! The Musical is a play which chronicles the events of the Salem Witch Trials. Written by Conrad Askland in 2012, the musical is described as taking the historical events of the Trials and adding some characterization, with a little bit of fantasy thrown in. The primary protagonist is Abigail, a young girl who is alone and without friends. She lives with her uncle, the Reverend Parris, his daughter Betty, and his slave Tituba. When Abigail shows the girls in the reverend's bible study a way of telling the future, strange afflictions start befalling the girls in the group, starting with Betty Parris.