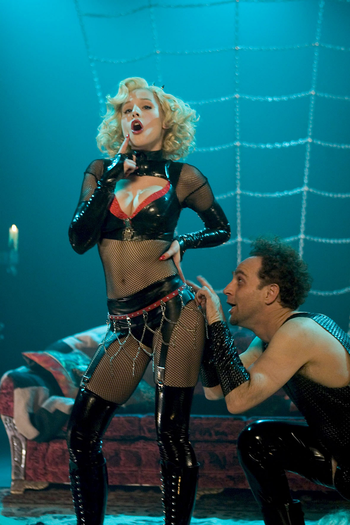 ♫ Just call me Mary "Wanna"
And Mary's got some scary little games to play! ♫
"So come on, baby, let down your guard.
When your date's in the bathroom,
I'll slip you my card!
I can tell just by looking
That you've got it hard—
For ME!"
— "Special", Lucy the Slut from Avenue Q.
Advertisement:

A subtrope of the "I Am" Song, in which a female character establishes her character... and her character is all about living freely, especially sexually. How explicitly that sexuality is addressed mostly depends on how old the musical is.

In musicals, usually sung by the secondary female character (soubrette). She might be anything from a prostitute to a Good Bad Girl. Not to be confused with a Villain Song by a female villain, though the two may overlap if she's The Vamp.

This may double as a Seduction Lyric, if the Bad Girl is currently engaged in exerting her badness on a potential partner; her line may well be "I'm good at being bad and you'll enjoy it".