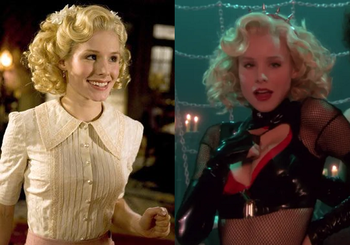 "Easy for a good girl to go bad, and once we gone, best believe that we've gone forever."
— Rihanna, "Good Girl Gone Bad"

She is adorable, sweet, nice, good-hearted... your stereotypical good girl. Until that fateful day. Abduction, murder, rape, any kind of violence. You name it. The nice, good girl goes through an event (or series of events) that changes her character and shapes her to the way she is now.

They come in various different flavors. Sometimes they're simply an Ice Queen. Other times, they are worse. Many female villains tend to be good girls gone bad.

Subtrope of Face–Heel Turn. Not to be confused with Good Bad Girl, which is more about a woman with a reputation for being 'bad' who is actually a good person. May also relate to Used to Be a Sweet Kid, Corrupt the Cutie, Unstable Powered Woman, Woobie, Destroyer of Worlds, Woman Scorned.

Due to this trope often being used as a plot twist, be wary of potential unmarked spoilers.