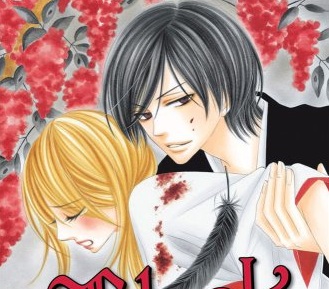 They're in love, can't you tell?
"Sometimes he's rough
He throws me down the stairs, but deep inside he cares"
— Mae, "The Stuff", Reefer Madness: The Musical

A common Japanese character type, the Bastard Boyfriend (in Japanese, kichiku, literally "brutal" or "demonic") character is an Always Male Love Interest whose defining trait is that he is cold, cruel, or abusive to his romantic partner, in a manner intended to be kinky and appealing to the audience. Western versions exist, but are comparatively rare due to their implications, except in fanfiction (which lacks the watchful eyes of Moral Guardians).

Bastard Boyfriends can be readily distinguished from being a Jerkass or committing Domestic Abuse because their abuse is eroticized, and their beloved's conflict and unhappiness will be played for titillation. As such, they are all-but-guaranteed to be Mr. Fanservice, usually a Bishōnen, and the consequences of their behavior are almost never handled realistically. The Bastard Boyfriend almost always gets his girl (or guy), even in cases where they don't seem particularly compatible, although a few are doomed to merely be the rival.

This type is common in Yaoi Genre (as a standard Seme type), Shoujo, and, to a lesser extent, Josei romances, but comparatively rare in works aimed at a male audience, where guys like this are more likely to be the Romantic False Lead or just a villain.

Their love interest, which can be either male or female, is usually The Protagonist, although a minority of stories are from the Bastard Boyfriend's point of view. They will probably be presented as a Love Martyr or The Woobie, and is likely to spend quite a bit of the story anguishing over the relationship, possibly while weeping beautifully. This trope has next to no overlap with Belligerent Sexual Tension since Bastard Boyfriends never seem to show an interest in anyone with the backbone to defy them.

Unconflicted (standard): Poised, confident, and perfectly happy with his own behavior, either because he doesn't care what the other party thinks of him, genuinely believes that abduction and molestation are viable ways of showing his affection, or just is a plain, sadistic bastard. The Bespectacled Bastard Boyfriend (Kichiku Megane) subtrope is built on this type.

Conflicted (alternate): Troubled, but Cute and his abusiveness is generally driven by jealousy, insecurity, a crushing inability to express his feelings, a Dark and Troubled Past that completely screwed up with his view of the world, or (very rarely) a desire to drive the other person away (possibly out of a belief that they will be happier with someone else). This type may have started as an attempt at a more realistic implementation of the character type.

Both kinds are highly likely to be jealous and possessive. Expect plots to feature a Green-Eyed Epiphany — a character realizing their love only via jealousy.

The Bastard Boyfriend is likely to be redeemed by The Power of Love at the end of the book; alternately, he may eventually be revealed to be nicer underneath. A minority may be revealed to have a Freudian Excuse (such as Abusive Parents or extremely bad former romances). If none of these things happen, his partner may decide that Stalking Is Love and embrace their status as a Love Martyr. Along the way, the Bastard Boyfriend may well be Master of the Mixed Message, if the author needs something to keep his partner strung along.

Works that contain Stalker with a Crush or Mad Love relationships are likely to attract fan interpretations where the characters are recast along these lines.

Spear Counterpart of Bastard Girlfriend. Usually a type of Romanticized Abuse and subtrope to All Girls Want Bad Boys, with a side order of Evil Is Sexy. If the Kichiku character also has status, power, and hot little glasses, he's a kichiku megane (see Bespectacled Bastard Boyfriend). Contrast the Jerkass varieties of Romantic False Lead and the Disposable Fiancé, who are superficially similar but guaranteed not to get the girl, Domestic Abuse, and Unsexy Sadist, who have the cruelty minus the fetishization.

A Handy Chart to determine if a character is this trope:
Your guy is in love, and he demonstrates his love in an abusive or predatory manner. His love interest: