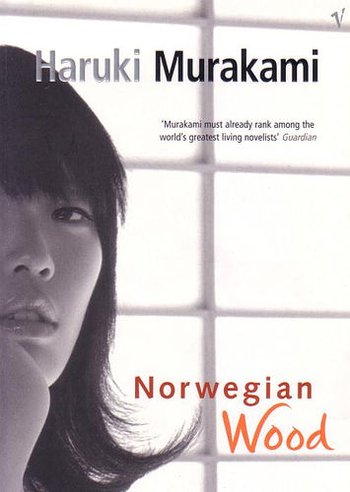 Norwegian Wood (Japanese: ノルウェイの森, Noruwei no Mori) is a 1987 Coming of Age novel by the Japanese author Haruki Murakami. The publication of this book led Murakami to unwanted superstardom in Japan; so much so that he eventually left for the United States and Germany. Fans of his works often note that Norwegian Wood as a novel is far removed from his ordinary works. It is a fairly straightforward tale of adolescent romance and the protagonist, Toru Watanabe, is very much an Everyman as opposed to other protagonists in works such as Kafka on the Shore or After Dark.
Advertisement:

The plot follows a love triangle among Watanabe, his childhood love Naoko and a girl he meets at university, the outspoken and lively Midori. Each girl represents different things to Watanabe but he has a hard time choosing.

Some critics consider Norwegian Wood to be semi-autobiographical but the author has flat out denied this, describing Norwegian Wood as a "challenge" that he did to see if he could write a novel with none of the themes that have become his trademark in later works.

A film adaptation was made in 2010 by the Vietnamese director Anh Hung Tran. It was released in December 2010 in Japan, as well as festival showings and small releases in Canada and Italy. The cast features Rinko Kikuchi, Kenichi Matsuyama, Shigesato Itoi, Haruomi Hosono, and Yukihiro Takahashi. The score was composed by Jonny Greenwood.

Tropes found in Norwegian Wood include: