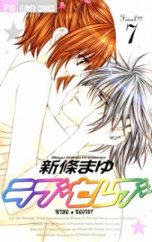 At age 16, Kirara Nakazono dreams of becoming an Idol Singer, despite her utter bad luck at getting roles or auditions. She thinks that she'd do whatever it took to fulfill her dreams, but then her life puts such beliefs to the test.

One day, her manager Hanamaki tells her to attend a supposedly very promising and hard audition and she decides to go... but much to her shock and horror, it's one set in a hotel where the girls actually offer to have sex with the producers in exchange for roles! Kirara panics and tries to escape, but one of the guys tries to rape her. Then she's rescued by a man who turns out to be Ginzou "Gin" Fujiwara, one of the most famous and influential executives of the whole Japan. He listens to Kirara's plight and promises to take her under his wing, but with one condition: she should give him her virginity.

Kirara leaves the party few afterwards, still a virgin and with a note including Gin's phone number... and yet, few later, she's getting several prospect contracts and quite a bit of fame? What did Gin do, and what does he really want from her?! Then starts the fight for Kirara's heart, parallel to her struggles to become a star.

Again, here we have a Mayu Shinjo manga with all it implies. It also has some cameos from other charas by Shinjo, namely Sakuya from Sensual Phrase and Hakuron of Haou Airen.

Love Celeb has the following tropes: