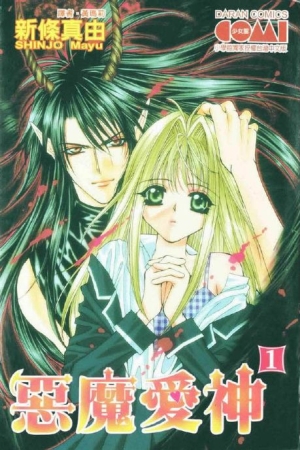 The Devil went down to... Tokyo?!
Advertisement:

High school student Miu Sakurai has the toughest luck. She's much older than she looks and has the biggest crush on Shion Amamiya, the resident hottie, so she believes that her underdeveloped physique keeps her from being noticed by him. She decides to try getting him by other methods... like Black Magic. Sure, maybe reading the old spellbook she found in a book-store will work, she has nothing to lose anyway.

The thing is, the spell was actually a Deal with the Devil, and Miu ends up summoning Satan himself. Much to her surprise, Satan turns out to be... much less ugly than you'd think, since he has the looks of a Tall, Dark, and Handsome guy alongside a mean and perverted streak. Miu tells him her woes, he agrees to help her get Amamiya's heart... but demands the girl's virginity as the price. Miu gets scared and tries to resist, and there's how she is a Japanese Christian causes weird effects around them. Satan is intrigued and amused, so he starts stalking Miu under the guise of being her older brother Kai and brainwashing everyone into recognizing him as such, but there are a few surprises around in store for both Satan and Miu...

The first famous manga by Mayu Shinjo, Akuma na Eros was serialized in Shoujo Comic from 2001 to 2002. It's just as Hotter and Sexier as her average stories, has plenty of bishonen, and some supernatural touches. A little bit of everything, you could say.