Manga / In These Words 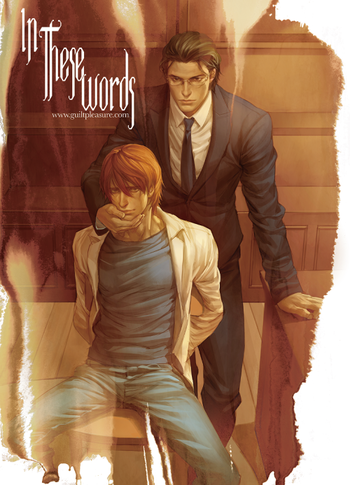 In These Words is a thriller/mystery Manga written by Narcissus (aka Kichiku Neko) and illustrated by Jun Togai (aka Toga Q) who form the creative duo Guilt Pleasure. The story is centred around the complicated events that surround Katsuya Asano and Keiji Shinohara.

Katsuya Asano is a world-recognized profiler who has been brought in to investigate a series of unusually gruesome murders of young men in Tokyo. The alleged perpetrator, Keiji Shinohara, has been arrested and is being set up for interrogation. Unbeknownst to Katsuya, Shinohara has actually requested to be cat-scanned by him. As the interrogation goes on, Katsuya starts having very strange nightmares that feel way too real and seem to be linked to the strange scars on his back. During these Dream Sequences, a man whose face is constantly shrouded in shadows tortures and rapes him, all while claiming to love him to death.

Moreover, Shinohara seems to be perfectly aware of the dreams of his interrogator, which troubles Katsuya even more. But are these truly dreams? Or are they deeply repressed memories? And is Shinohara really the murderer that Asano is looking for? As the line between dream and reality starts to fade, Asano wonders if he isn't starting to become insane himself, all while Shinohara seems to be playing with him, including sexually...

In more ways than one, In These Words stands out from the usual Yaoi production, mostly due to the thickness of the plot and the exquisite artwork. While it doesn't skimp on the explicit sex scenes, some of these scenes can border on Fan Disservice, given the unusual setting. And the overall atmosphere, constantly striding the line between dreams, madness and reality reminds strangely of the works of Satoshi Kon.

Currently, there are 3 tomes released in English-speaking countries and a fourth one is to be released in 2021. A total of 12 prequels have also been published, explaining a bit further on both characters' backstory.