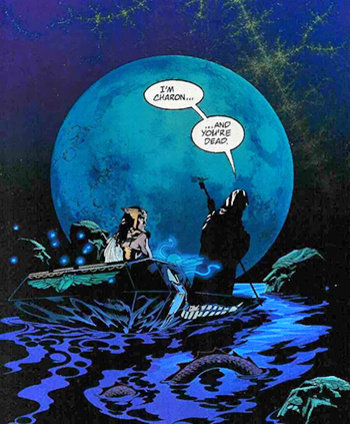 An old archetype, the ferryman is a character (and sometimes Deus ex Machina) who acts as a guide or aid to another character, allowing them to travel over near-impossible obstacles to reach (or at least help reach) a specific destination.

The most classic depiction is Charon of the River Styx,note Early sources have him ply the River Acheron instead. who aided souls across said river if he was paid, as there was a worse price to pay if you tried to swim through the waters. And like Charon, the archetype's representative need not be good or even evil; the character need not also be a literal ferryman; practically anything that can transport something/someone from one place to another is considered acceptable, including flight, teleportation, or even "dream walking."

In some cases the Ferryman is the neutral counterpart to the Mentor, even adviser, as the ferryman can guide through more than just the obstacles of the physical spectrum… though usually at a price/reason of fair enough degree (be it a coin of burial gold, or a promise to aid the nation's resistance against the Empire).

Not to be confused with the play of the same time written by Jez Butterworth.