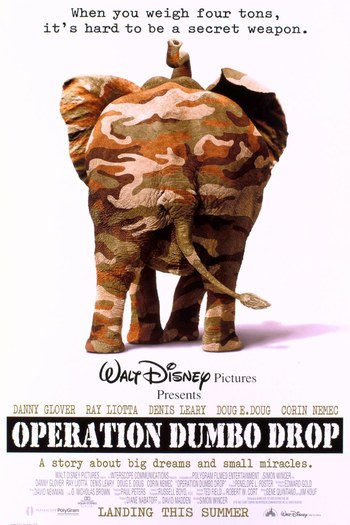 "I should be on a top secret mission with crack commandos, but instead I'm in an episode of McHale's Navy starring Dumbo, Mr. French, and The Three Stooges!"
—Captain T.C. Doyle
Advertisement:

Operation Dumbo Drop is a 1995 Disney live-action comedy film set during the Vietnam War. In it, Capt. T.C. Doyle (Ray Liotta), a hard-nosed Green Beret, is assigned to a local village to keep watch on the Ho Chi Minh trail. There he meets up with with Capt. Sam Cahill (Danny Glover). While the two are out scouting the trail, the NVA raid the village, discovering a chocolate bar wrapper, meaning the villagers were harboring American troops. As punishment, they shoot their prized elephant.

Feeling responsible for their loss, Cahill promises to get them a new one, a move that Doyle vehemently opposes. Despite his protests the operation is approved and Doyle is placed in charge. They set about gathering their team, comprising of two soldiers, a requisitions officer, an elephant and the boy who handles the elephant, Linh.

Along the way, the NVA are tipped off about what they are doing and, in an effort to keep them from keeping their word, set out to stop them. This begins a chase through the deep, green jungles of South Vietnam, which ends when they find the only way they can get the elephant to the village — is up.