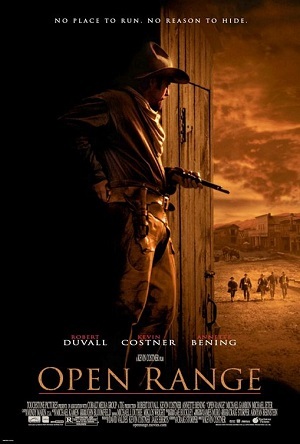 A 2003 western film directed by and starring Kevin Costner alongside Robert Duvall, Annette Bening, Michael Gambon and Diego Luna. The film is partially a deconstruction of many old western films where a lone hero rides into town and stands up for the downtrodden townsfolk against the mustache-twirling villain.

In Open Range, the hero isn't lone... he has his boss, and two friends. He's also not a gallant, dashing hero with an iron jaw and an ironclad sense of justice... he's a Civil War veteran with PTSD who struggles constantly against the psychosis and guilt inflicted by what he's done in the past, trying desperately to find what's right in the situation. His love interest is not the naive young maiden who's desired by all in town, but a woman of his own middling years who's rather weathered and cynical in her own right.

But overall, the film is more interested in using these to add more realism and a sense of being an actual time in history to a classic cowboy story. For all its Darker and Edgier take on the cowboy hero, it is ultimately an idealistic tale of good men doing something and not allowing evil to triumph.