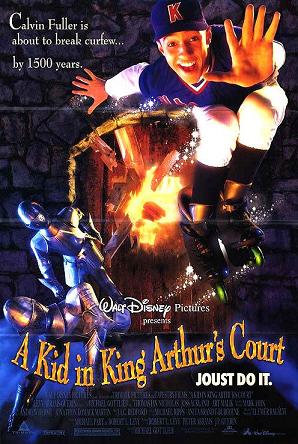 What would Mark Twain have thought?
A 1995 film based loosely on A Connecticut Yankee in King Arthur's Court.
Advertisement:

A young kid, Calvin Fuller (Thomas Ian Nicholas) is playing a baseball game when an earthquake opens up a rift in the ground and transports him to the 6th century, where he meets up with King Arthur. He also encounters the spirit of Merlin, who confirms that it was his magic which pulled Calvin back to Camelot. There are a lot of problems afoot, and Merlin will only send Calvin home if he puts things back to rights. Along the way, he falls in love with one of King Arthur's daughters, tosses off a lot of anachronisms in failed attempts to be funny and ends up getting transported back to his baseball game.

Has a rather obscure Direct to Video sequel entitled A Kid In Aladdin's Palace.