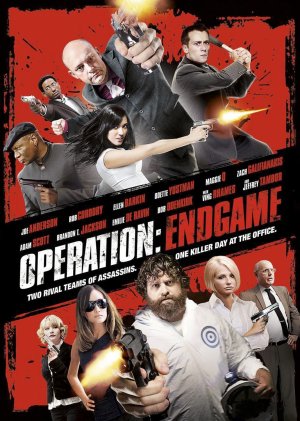 Operation: Endgame is an action/comedy/bloody movie that covers the topic of what happens when a bunch of covert operation personnel get locked down in their own office. On top of that, there is a bomb set to go off that will flood the compound with napalm to erase all evidence of its existence from the outside world.

There are two teams, Alpha and Omega, and all of the members of both teams are named after tarot cards. The head of both teams is the Devil, whereas team Alpha is headed by Empress and Omega by Emperor.

It's pretty much How To Kill Your Friends With Office Supplies: The Movie, but it has a neat twist at the end. The movie is listed in some places with the title Rogues Gallery instead.

This Work Includes Examples of: