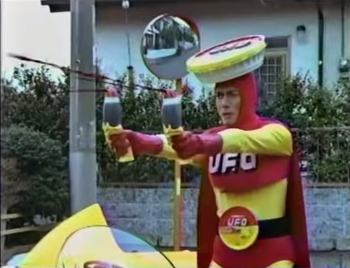 UFO Kamen Yakisoban is a series of Japanese UFO Ramen commercials by Nissin Foods that gained popularity in the 90s. An Affectionate Parody of toku series such as Kamen Rider, the ads starred Yakisoban, a superhero with the power of noodles and sauce who hailed from the Yakisoba Planet. In his ads, he stood for truth, justice, and proper ramen-eating habits, foiling his Evil Counterpart Fake Yakisoban and his arch-enemy, the kettle-headed Kettler, who planned to steal all the kettles of the world to prevent anyone from making instant noodles.

The ads were so popular they got a tie-in video game, UFO Kamen Yakisoban: Kettler no Kuroi Inbou, a direct-to-VHS movie, UFO Kamen Yakisoban: Ikari no Agedama Bonbâ, a comic series in CoroCoro Comic from March to June 1994, spin-off ads featuring Yakisobany, Yakisoban's female cousin, many pieces of merchandise, and even a themed attraction at Japan's Yomiuriland. The movie's theme song was sung by Hironobu Kageyama and became a hit CD single.

Eventually, Kettler became more popular than Yakisoban and appeared in the ads instead, and they ceased altogether... until 2017, where the ads made a comeback with a darker turn. Now barely making a living and disrespected by a public that once hungered for him, Yakisoban makes a Face–Heel Turn and sets out to destroy what he once fought for as the Demon King. He is opposed by new Kamen Rider-themed heroes—Sauce, his son with a passion for extreme ramen who transforms into Yakisoboy, Sauce's girlfriend Claudia who fights with a ramen-themed gun, and the Legend, a legendary hero played by Hiroshi Fujioka himself who can turn into a motorcycle and a tank.

As the description implies, these ads are very much a Widget Series. A collection of vintage Yakisoban commercials as well as some of the revival ads can be found here

, a translation of all three Yakisoboy commercials can be found here

, and an overview of the tie-in game can be found here

. The movie can be found here

These ads and related media provide examples of: