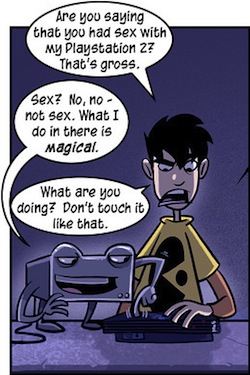 A subtrope of Non-Human Sidekick, normally a Snarky Non-Human Sidekick, that has become very popular in Webcomics, the Talking Appliance Sidekick is an inanimate object, normally a household appliance that talks and... you see where we're going with this. Beyond that, they are very likely to be part of a comic with a technological or a fandom bent; if it's Two Gamers on a Couch, expect something related to game consoles, and if it's a comic about the Surrey Woman's Institute knitting circle, expect it to be a sewing machine. Such a character will have a lot of similar attributes of the Robot Buddy, but sometimes is used as a parody or deconstruction of it and, like a lot of webcomic sidekicks, will be the outrageous Comedic Sociopath.

Probably codified for its many imitators by Penny Arcade and their walking, talking DIVX platter, but the trope could well be Older Than They Think for examples that don't fit into the "Surrey Woman's Institute Knitting Circle" mold. For instance, KITT from Knight Rider was a talking car who was a very deadpan Non-Human Sidekick who inspired a number of other talking cars.

Unlike a lot of other Animate Inanimate Objects, these guys will have no problem acting up around normal people with no sense of Masquerade.

If Rimmer isn't around to keep him company, Lister can always look to his toaster.

If Rimmer isn't around to keep him company, Lister can always look to his toaster.