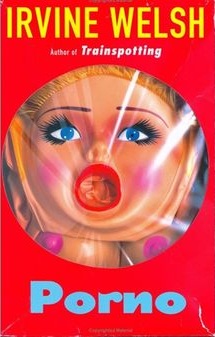 Simon "Sick Boy" Williamson is still scheming and burning his way through people in the big smoke, but something is missing. Leaving his bar job under acrimonious circumstances, he agrees to his auntie Paula's offer of taking over the Port Sunshine pub back in Leith. He recognises one last big chance to flourish his egotistical obsessions and cashflow: a feature length porn film named "Seven Rides For Seven Brothers" starring the hottest sluts and best hung studs in town. Yet the only way to fund this project is to scam yet more people... like it's going out of fashion. All the while fuelled on a Colombian factory level quantity of cocaine.

Mark Renton has, believe it or not, been enjoying a prosperous life in Amsterdam. Notoriously fleeing his friends at the end of Trainspotting with thousands of pounds, he's cleaned up from hard drugs and invested in a popular nightclub. Nevertheless, he's wary of crossing paths with his old mates and has been practicing karate for an eventual encounter with the dreaded Begbie. What's more, he's tired of his relationship with a jaded German woman and knows that sooner or later he'll have to be moving onward. But even his cautious administration of the club behind the scenes can't keep him hidden from Leith eyes for ever...

Nicola Fuller Smith or "Nikki" is a twenty five year old English student and proud super-bitch who feels her life is stalling with no decent opportunities ahead of her. She's bored of her modules, changes uni and programme frequently and relies on illicit massage therapy at a local sauna to make up the bills. Joining her highly strung flatmate Lauren and their new friend Rab Birrel on the Edinburgh film studies course, she gets introduced to his sex crazed mate from way back, Terry "Juice" Lawson and his posse of stag video associates. Enjoying the company, and encouraged by Rab's ideas of making a "thinking man's porno", she signs up for a leading role and gets into a torrid affair with Simon. She also is a main player when it comes to the writing and financing of the picture.

Franco Begbie has been serving further prison time for a murder of one of his psycho contemporaries (albeit he managed to disguise it as a justified self defence kill). Tormented by anonymously-sent gay erotica magazines and brooding heavily about revenge on various parties (not least of which is Renton), he finally walks out of Saughton with the intention of never returning. But he's eager to pick up things exactly where they left off and find a new "burd" to replace his battered ex-wife, June. Parenting their two sons however isn't high on his priority list.

And last but not least, Danny "Spud" Murphy is at a crossroads with his girlfriend Alison. He's almost finally kicked heroin, but minor relapses, thefts and continued unemployment are doing nothing to impress her. Forced to live independently from Ali and their son, he decides to write a celebration of local Leith history to turn his fortunes around. However, a horrific drinking session with his prison chum Chizzy and difficult reunions with the old school crew threaten his hopes for a better life.