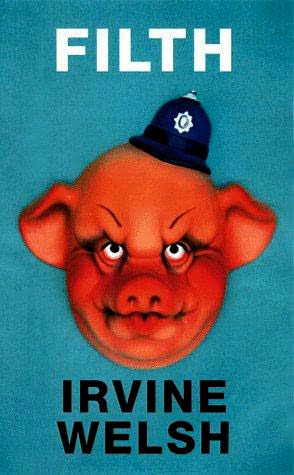 You can kiss mah bacon-flavoured po-leese ass muthafuckah.
"Filth? Ah'll gie the cunt fuckin filth."
—Bruce
"You loved once. Surely everybody does."
—The Self
Advertisement:

Filth is a Crime novel written by Irvine Welsh and published in 1998.

Bruce Robertson is pure filth in every sense of the word. He's a misanthropic, racist, sexist, homophobic and very corrupt sergeant detective working for the Edinburgh "Polis" who, when not satisfying his cravings for drugs, junk food or orgasms, entertains himself by manipulating and tormenting his friends, colleagues, and everyone else he meets with vindictive schemes he calls "the games". His wife's just left him, taking his daughter, but he doesn't spend a whole lot of time thinking about the divorce, preoccupied as he is with his upcoming vacation in Amsterdam, the growing rash on his testicles, a prospective promotion from his hated boss, and the case of the murder of the Ghanian ambassador's son (which he doesn't plan on solving).

When Bruce eats an uncooked gala pie, however, he ingests an existentially-curious tapeworm. The tapeworm, who starts calling itself The Self, strangely seems to have the ability to read Bruce's mind and comment eloquently on his life; eventually, it begins to unearth Bruce's most repressed memories, which quickly explain why he is the way he is.

As with Welsh's other works, expect lots of phonetic Scots, salient characters, petty crime, typographical experimentation, lots of profanity and extremely dark humour. It's got something of a twist ending and is creatively written, so it's the kind of book you have to read twice to get the full understanding of.

A film adaptation starring James McAvoy in the lead role was released Oct 2013; the NSFW trailer can be seen here

Ray Lennox (Jamie Bell) got his own spin-off novel called Crime in 2008.

The Book provides examples of:

The Film Filth provides examples of: