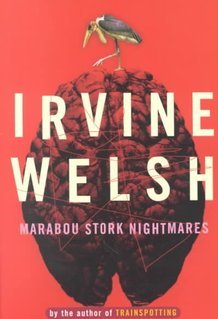 Marabou Stork Nightmares is a novel by Irvine Welsh, who also authored a cheerful little book turned into a film called Trainspotting. And god, is it ever an Irvine Welsh book.

Roy Strang is a twenty-something Scot who is an adventurer in the wilderness of South Africa. He is on a mission to hunt down the evil Marabou Stork, a deadly and elusive predator that preys on the peaceful wildlife around the lake.

...but that's All Just a Dream he has created for himself. Roy is narrating from a coma in a hospital bed (for reasons unexplained at first). While the story goes on, reality keeps cutting in on his fantasy life. The real world for Roy is the miserable Edinburgh slum he grew up in, angry delusional parents and disturbed siblings, a gang of city thugs with whom he associated with, and a heavy dose of dark and disturbing memories.

And then things get really nightmarish.