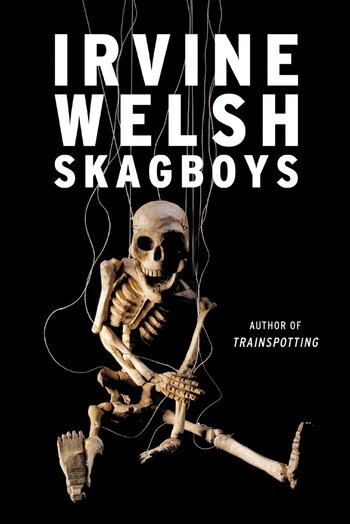 some caption text
Renton: But what did ye say tae get him tae come back inside?
Cop: I just told him that no matter how bad it all seemed now, it's just part and parcel of being young. That it gets easier. That he's got to remember this and not throw it all away. That life is a gift.
Renton: Does it? Get easier, I mean.
Cop: Does it fuck; it gets bleedin worse...
Mark Renton's got it all: he's young, smart, and good-looking with his own flat, girlfriend, and a place at Aberdeen University. But there is no room for him in the 80s. As Thatcherism demolishes working-class communities across the UK, Renton's family fractures and he finds himself drawn deeper and deeper into the unsavory, drug-infested side of the Northern Soul scene as he succumbs to defeatism and despair. His life begins to fall apart, but nothing is ever so bad that it can't get worse.
Advertisement:

His friends aren't doing much better. Frank Begbie's increasingly unhinged and violent behavior is making him a feared name across Leith. Spud is laid off from his furniture removals job and unable to find new employment. Tommy Lawrence is unwillingly sucked into the world of petty crime by Begbie and Matty Connelly. And Simon "Sick Boy" Williamson is becoming more and more at the mercy of the inner rage which compels him to scar, manipulate, and torment everyone he can. But with bust comes opportunity...

The highly-anticipated prequel to Irvine Welsh's Trainspotting, Skagboys tells the story of the disintegration of these friends against the backdrop of Edinburgh in the 1980s: a time and place of drugs, poverty, AIDS, violence and rapidly vanishing hope for the future.