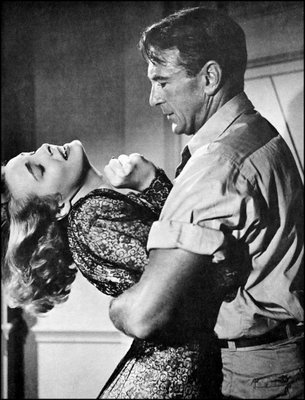 The Fountainhead is a 1943 novel by Ayn Rand. It was made into a 1949 film starring Gary Cooper and Patricia Neal, with Rand herself writing the screenplay. The film was directed by King Vidor.

Howard Roark, The Hero of the story, is an architect whose style tends toward being "modernistic." Problem is, everyone else where he lives likes to recycle old styles, so Howard is more of an acquired taste in the art world, where only a few folks (who become his True Companions, more or less) appreciate him.

The Architectural establishment all damn Roark for being insufficiently humble enough to "realize" that no one will ever approach the glories of the past. No one cares that Roark's buildings are actually pleasant to live in; no, people don't want to live in houses, they want big flashy facades with lavish ballrooms so they can entertain their friends and impress them.

And so begins architecture as a metaphor for the content of people's selves. Those that build houses for the purposes of showing off and impressing friends do not have any content of their own in their soul; they live second-hand, dependent on other people for their psychological sense of self.

Zack Snyder is working on a new film adaptation.