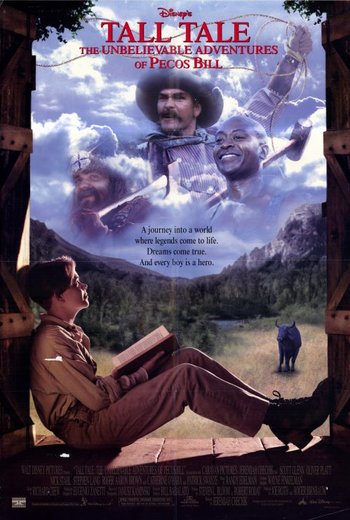 Tall Tale: The Unbelievable Adventures of Pecos Bill is a movie produced by Disney in the early nineties. It features Nick Stahl as a young boy in the late 1800s who meets folk heroes Pecos Bill, Paul Bunyan, and John Henry.

After his father is shot for refusing to sell the deed to his land in Paradise Valley to an evil coal-mining magnate, Daniel Hackett (Stahl) goes on the run trying to keep the deed from falling into the mining company's hands. He is saved from two outlaws by badass cowboy Pecos Bill (Patrick Swayze). After explaining the situation, Pecos offers to help Daniel, but not before seeking out the help of his old friend, legendary lumberjack Paul Bunyan (Oliver Platt). The trio heads to Liberty City, where they encounter John Henry (Roger Aaron Brown), the steel-driving man. The group continues to battle their way back to Paradise Valley against the mining company's hired guns. All the way, Daniel learns about courage and what it means to be a real man.