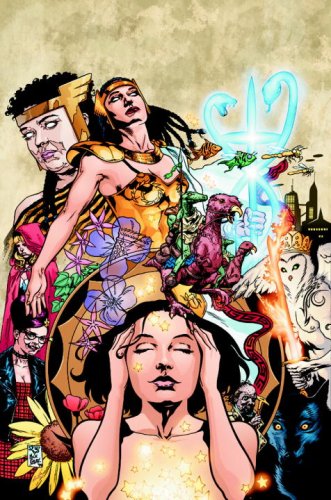 "There are 1,000 comic books on the shelves that don't contain a philosophy lecture and one that does. Isn't there room for that one?"
— Alan Moore
Advertisement:

Promethea (1999-2005) was an award-winning comic book series by Alan Moore, published by America's Best Comics. Sorry, we're probably going to have to be more specific, huh?

The protagonist, a student named Sophie Bangs, while researching a college paper, discovers several references to a character named Promethea. These references are in a variety of literary works including epic poetry and comic books. Curious, Sophie investigates and eventually finds Barbara Shelley, the wife of the now-deceased author of the latest incarnation of the character. Her attempt to interview Ms.Shelley is unsuccessful.

Her investigation has been noticed, and she is warned by Barbara Shelley. On her way home she's attacked by a Living Shadow, but is rescued by a curious figure - Barbara, dressed as the latest incarnation of the Promethea character.

After they escape, Barbara tells Sophie how her husband's imagination made it possible for her to become Promethea. She explains to Sophie that in ancient Egypt a magician tried to save his daughter from the religious persecution that would kill him by getting his gods to preserve her forever as a story. Barbara further explains that some authors including her husband enabled her to cross back into the material world through the power of imagination as the superhero Promethea. Barbara warns Sophie that they have only managed to slow the Living Shadow down. She suggests that Sophie try and use her creativity to summon Promethea or they are both doomed. Sophie retreats and writes about the character, imagining herself as Promethea, and succeeds in fully embodying her. She manages to fight back the creature as it returns, but her troubles have only just begun.

Now Sophie has to figure out how to be Promethea and herself. She has to learn to identify and deal with Promethea's enemies, and for that she seeks guidance from the former incarnations of Promethea. This involves journeys into the Immateria, where individual imagination and a more universal plane of ideas meet.

The series has a heavy focus on the occult, and its related spiritual and psychological questions.

In 2018, the character was introduced to the main DC Universe in an issue of Justice League of America (Rebirth).