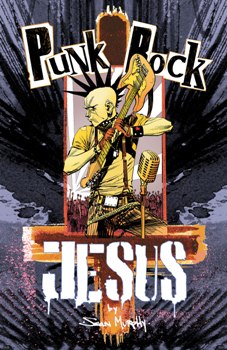 Lets give them what they came for!
"Hello, America! The most Christian nation on earth! The one that God has blessed! This is Jesus Christ, coming to you live from lower Manhattan, telling you all... go fuck yourself! Jesus hates you!"
— Chris, Punk Rock Jesus #4
Advertisement:

Punk Rock Jesus is a six-issue Vertigo mini-series by Sean Gordon Murphy, known best for his work on Hellblazer: City of Demons, Joe the Barbarian and American Vampire: Survival of the Fittest. It has been described by Murphy as his "passion project years in the making," and focuses on the cultural impact of religion and mass media on the United States.

The story follows Chris, a genetic clone of Jesus Christ who grew up as the star of a reality show called J2, eventually rejecting all things religious, becoming an atheist, and using his celebrity status to start a punk rock band in an effort to rebel against religion.