Literature / Return of the Living Dead 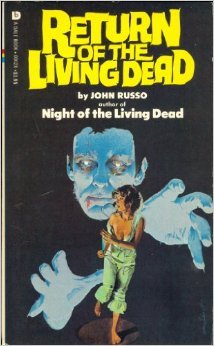 Return of the Living Dead is a 1978 horror novel by John Russo. It is a sequel to his Novelization of Night of the Living Dead (and arguably the film itself, which he co-wrote with George Romero), depicting a second Zombie Apocalypse some years after the previous one.
Advertisement:

The story is set a decade after the previous zombie uprising, which was successfully suppressed. Sisters Ann, Karen and Sue Ellen Miller are driven by their extremely religious, emotionally abusive father Bert to the funeral of the youngest daughter of Henry Dorsey, who died suddenly of rheumatic fever, her father drives a metal spike into her skull with a mallet.

The Millers and indeed everyone present are followers of the radical Reverend Michaels, who believes the recently dead must have their brains spiked. Not everyone agrees with Michaels' ideas, least of all Sheriff Conan McClellan, who doesn't believe "it" can happen again.

A violent bus crash interrupts the funeral, and a suddenly worried Michaels insists that the entire congregation come with him to spike the brains of all of the crash victims before the authorities arrive and stop them. Bert Miller forces his thoroughly horrified daughters, including pregnant Karen, to participate, despite their protests. They don't succeed, having to flee before Sheriff McClellan arrives.

Later that night the bus crash victims who didn't have their brains spiked begin to rise at the county morgue and go shuffling off to find victims. One of the first places they attack is the Miller house. Bert Miller gets eaten, but the girls are saved by the arrival of three men and one woman claiming to be State Troopers transporting two prisoners.

But there's a problem. Only two of the "Troopers," John Carter and Wade Connely, are in uniform, while the other two, with the rather unlikely names of Flack and Angel, aren't. It quickly becomes apparent to the Miller sisters that there "rescuers" are in fact escaped criminals posing as cops, and the "prisoners" are the real policemen. And that their rescuers turned captors plan on using them as what Flack calls "zombie feed" to keep the ghouls off of them while they make their escape...

It isn't to be confused with the film The Return of the Living Dead, or its Novelization, which, confusingly, was also written by Russo, meaning the same author has written two entirely different books with the exact same title. Russo did adapt the novel into a screenplay with some changes (toning down a lot of the sexual elements for one thing), but it was ultimately never made into a film.

The book remained out of print for years, making it a highly sought after collector's item. But eventually it was republished in Undead, an omnibus edition with the first film's novelization, featuring an introduction by Russo himself.