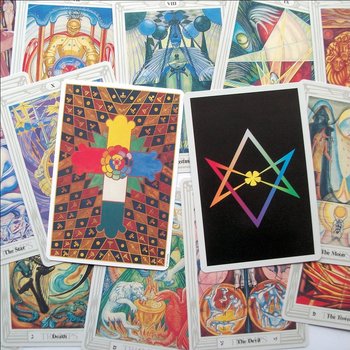 The Thoth Tarot is a divinatory deck of Tarot Cards painted by Lady Frieda Harris according to instructions from Aleister Crowley. Crowley referred to this deck as The Book of Thoth, and also wrote a book of that title intended for use with the deck.

Crowley originally intended the Thoth deck to be a six-month project aimed at updating the traditional pictorial symbolism of the tarot. However, due to increased scope the project eventually spanned five years, between 1938 and 1943 and both artists died before publication in 1969 by Ordo Templi Orientis. Crowley and Harris painted some of the cards as many as eight times. The current edition of the U.S. Games Systems deck has two prototypes by Lady Harris but then rejected by Crowley. In 1977 Harris' paintings were rephotographed for a second edition and further revisions followed in 1986 and 1996.

The illustrations of the deck feature symbolism based upon Crowley's incorporation of imagery from many disparate disciplines, including science and philosophy and various occult systems (as described in detail in his Book of Thoth).

To see the illustration of each individual card, please refer to the Image Link page.

The Thoth Tarot provides examples of: