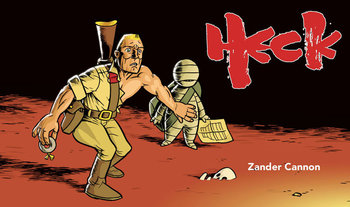 A graphic novel by Zander Cannon, first published in serialized form in the digital comic book Double Barrel in 2012 and released in print in 2013 by Top Shelf Productions. Hector "Heck" Hammarskjold, former high school football star, returns home for his father's funeral, planning to finally discard the last of the old man's crap. And then he discovers a portal to Hell in the house's basement...

Five years later, Heck has established himself as an "inheritance consultant": for a small fee and a contract signed in blood, he'll travel into Hell, find a recently-deceased person, and tell or ask them anything you want. When his old high school flame comes in to give a letter to her late husband, Heck takes on the job-but there's more to the story than there first appears...