Video Game / Oedipus in my Inventory 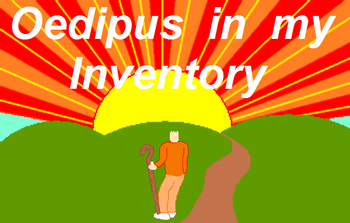 A good shepherd knows his king...
A 2015 freeware Point-and-Click Adventure Game for PC, made in Clickteam Fusion 2.5 and published on itch.io

. Expanding on scenes from Oedipus the King, the player assumes the role of a shepherd on three different days in Theban history.
Advertisement:

The author made the entire game in under two hours, and it shows.