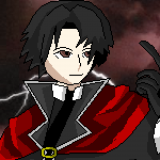 It took him 2 years to make the very long Nintendo Nightmare, which he started developing in 2007. Having recently discovered GameMaker, he decided to make a 3D game featuring many different characters from various video game universes.

In 2011, he took part in a 4-hour game-making jam with the theme of "Life". His goal was to make a game that interacted with the player's Real Life, and he was inspired by Lavender Town Syndrome

. The end result was Escape From Lavender Town. The next day, judges posted the game on /x/ and it promptly went viral, with many YouTubers making videos of themselves playing the game

He also has a number of (mostly unfinished) more serious games that center more around plot than abstract concept. Most of his work can be found here

Small projects, and shorter games made for jams include: