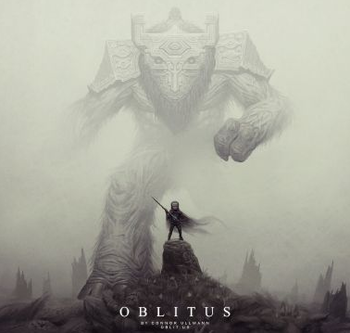 You will not see this giant in the actual game.
Oblitus is a Roguelike/Platform Game hybrid that takes a lot of inspiration from Dark Souls and Shadow of the Colossus.
Advertisement:

It was designed by Connor Ullman, has its soundtrack written by Josh Whelchel (who later worked on Masquerada Songs And Shadows), and was published by Adult Swim Games on February 27th, 2015.

In it, you are a masked warrior known only as the Harbinger of the titular Oblitus. You only fight with a spear and shield, though you get to throw your spear, and gain additional powers through picking up scrolls. Healing is extremely limited, and every time you die, the game starts all over again.

Has nothing to do with a 1991 Psygnosis game Obitus.