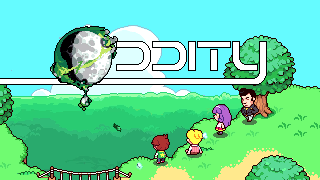 You'll make plenty of friends as you fight your way through this weird and groovy world!
Truancy, adventure and an aversion to business suits!
—Tagline on Mother 4's Home Page

Shortly after the release of Mother 3 in 2006, Shigesato Itoi revealed that there would not be a successor. Instead, he encouraged future creators to develop games in the same spirit he had when creating Mother.

Oddity is a game continuing the spirit of the Mother saga, in development by Azure Studios. Initially planned as a full-blown Fan Sequel to Mother 3 under the title of Mother 4, the game has since become a Spiritual Successor.

The game takes place in Pleiades in the year 197X, following a young boy named Travis, the leader of a biker gang named Leo, a fortune-telling girl named Meryl, and a charming boy named Floyd. An enigmatic group known as the Modern Men have shown up, and the mysteries surrounding them only continue to pile up...

Overall, the gameplay so far seems to stay true to the Mother experience, with a few additions from other popular RPGs. In addition to keeping Mother's famous scrolling HP mechanics, Oddity also includes an Action Command system a-la Paper Mario, ranging from standard button timing prompts to charge meter mechanics for VOX. Additionally, there appears to be something akin to a Team Attack system like that of the Persona franchise.

Development for Oddity had been pretty bumpy. Under the name Mother 4, the game gained recognition as one of the most ambitious fangame projects. It was slated for a late 2014 release but was pushed back to 2016. The team had aimed for release in June of 2015, but stated then that, due to needing help, they will not be announcing any more prospective release dates until the game is finished to be fair to people waiting. On March 1, 2017, the dev team announced that the game would rebrand itself into an original IP, as to not encounter the legal issues faced by other Nintendo fan games. This was done via an AMA on Reddit which can be found here.

On January 2nd, 2020, the dev team released a trailer for the game under its new title

For more information, including character profiles, screenshots, and samples of the soundtrack, go here

Don't be nervous, you can do it!