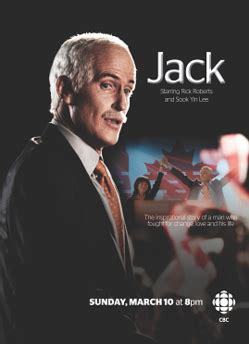 Jack is a 2013 CBC movie is about Canadian politician Jack Layton, following both his political career and his personal life from the time he was a Toronto city councilor, through his time as a Member of Parliament, up until his death.
Advertisement:

Not to be confused with the other Jack. (Although the CBC itself has done that.)