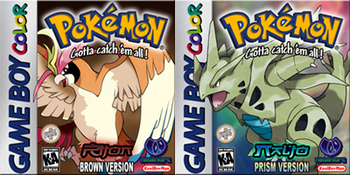 Pokémon Brown and Pokémon Prism are two huge ROMHacks of Pokémon games by KoolBoyMan, based on Pokémon Red and Pokémon Crystal, respectively. They are by far among the most well-known Pokémon hacks out there (they appear on The Other Wiki, and Bulbapedia

) and that's not without good reason. They are by far the most edited Pokémon hacks out there, with only the sprites and Pokémon themselves the same.

Prism works as a "sequel" to Brown, including more features and better graphics. Both games can be linked to each other, which allows the player to exchange Pokémon or battle.

While Brown was finished in 2009 (although an update was released in 2014), Prism nearly finished development (several working betas can be downloaded). Prism in a near-complete form premiered on Twitch Plays Pokémon note  In fact, the team behind TPP helped to rescue the game from Development Hell and did graphical work for Gen III and IV Pokemon but was unfortunately Cease and Desisted by Nintendo five days before it was set to release (however, the release build and source code were both leaked on 4chan's /v/ and /vp/ boards within 24 hours of the C&D). In 2017, a team dubbing itself "Rainbow Devs

" took up the project and continues to update incomplete content and implement bug fixes with the original creators' consent.

There was another sequel, called Rijon Adventures, which was be modified from Pokémon FireRed, and currently places itself 20 years after Brown's events - however, the conditions of the C&D means that production has ceased.

If you are curious, there is a Let's Play of Brown here

. All games cannot be obtained on the original website anymore, but a cursory Google can lead you to the patches.