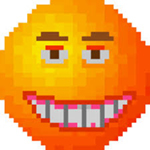 Pac-Guy, later known as Pea-Guy, is a parody of Pac-Man developed by Astral Entertainment in Multimedia Fusion. It tells the tales of the title character and his misadventures to combat evil and save the world, taking Random Events Plot to the fullest, with many shout outs scattered about. The series started as Pac-Guy in 1996, was changed to Pea-Guy in 2001, and is on indefinite hiatus as of 2005.
Advertisement:

The game series consists of the following:

The following tropes appear in the series: