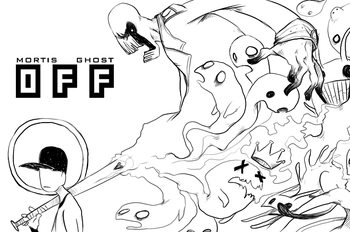 "A nice game for cute children."
You have been assigned to a being called "The Batter." The Batter has an important mission. Be sure that it's accomplished.
Advertisement:

OFF is an RPG created in 2008 by Mortis Ghost with RPG Maker, with music created by Alias Conrad Coldwood. Originally released in French, it has since received an English translation. Mortis Ghost himself has stated that he wanted to make a game that was like a cross between Killer7, Myst, and Final Fantasy VI.

The player enters their name and are informed that they are now in control of "The Batter", a serious and determined man in a baseball uniform and the game's main character.

The game takes place in a world nothing like what you know. The Batter encounters, only a few moments after you gained control, a white, wise, and snarky cat with a Cheshire Cat Grin that calls himself "The Judge". The people in this world called Elsens are practically all Inexplicably Identical Individuals. The items merchant Zacharie wears a variety of masks who has perfected Breaking the Fourth Wall, including saying that he knows he and everyone else are in a video game, and at one point telling you that the solution to a puzzle is located in one of the game's files in your computer (not that the other characters are any better; the player is repeatedly addressed directly by the name you input at the beginning). Strange creatures called Spectres are terrorizing everything in sight and mighty Guardians rule over the lands of the world, called Zones.

The Batter's mission is to "purify the world" from these Spectres, and you have to help him with it.

The latest translation can be found here

, and the original French version here.

There is also a soundtrack, that can be found here

. Note: page is in French. The game's become reputable on Tumblr, being the sixth most reblogged game of 2013 (in comparison, every other game on the list are big name titles).

NOTE: Since this game is highly subjective, be sure to put things that are implied, unconfirmed, or fantheory into the WMG section.

It is also highly recommended to play the game in its entirety before viewing the tropes below.

The switch is now on OFF.