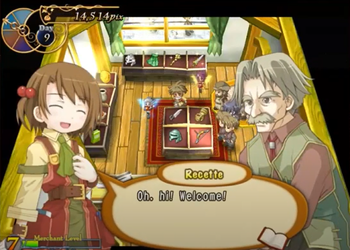 Now that's a smile you can trust!
"(Yay, a customer!) Hiya! Let me know if ya need help with anything!"
— Cheerful Manga Store Girl, Yandere Simulator
Advertisement:

These shopkeepers know the value of good service and go the distance in providing it. On top of knowing their market inside and out, their products are always reasonably priced. Despite having all the tools to scam someone for a quick profit, they would much rather help them make an informed purchase so they'll be inclined to come back again.

Expect these shopkeepers to be recurring characters who accommodate most if not all of the protagonists' essential shopping. They often make a great source of exposition, given how they're bound to be familiar with the area around their store and pick up juicy tidbits of information from their other customers. In some cases, they may even journey alongside the heroes as an Intrepid Merchant. These traits also make them a staple of video games as well as the Fantasy genre.

Compare The Bartender. Contrast the Asian Store-Owner and the Super-Stoic Shopkeeper, who are far more antsy and reserved respectively. The natural inverse of a Honest John's Dealership, Buy or Get Lost and Apathetic Clerk, where the shopkeeper tries to scam the buyer, is hostile to them if they're not buying anything or just outrights hates their job. An Honest Corporate Executive is when this person is in charge of a large corporation.

Vax and Pike pay a visit to an old friend in the hopes of getting information on dragons.

Vax and Pike pay a visit to an old friend in the hopes of getting information on dragons.