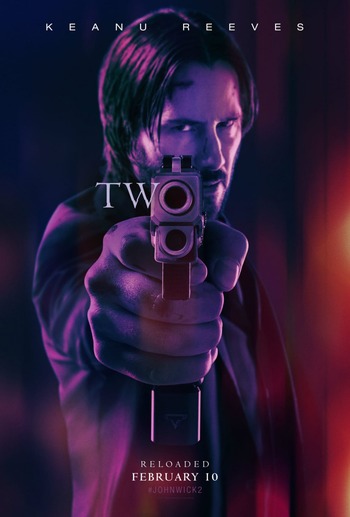 The only way out is back in.note Also, John Wick is about to shoot you. Again.
Santino: Listen to me. What is this? Hmm? Do you remember? This is your blood. You came to me. I helped you. If you don't do this, you know the consequences.
John: I'm not that guy anymore.
Santino: You are always that guy, John.

John Wick: Chapter 2 is a 2017 action thriller movie from the John Wick franchise.

Almost immediately following the events of John Wick, legendary hitman John Wick is forced back out of retirement by Santino D'Antonio, who wants to use John's skills to propel himself to a seat at the High Table, a cabal of the world's most powerful criminal organizations. Bound by a blood oath to help Santino, John travels to Rome, where he must square off against some of the world's deadliest killers.

As with the first film, PAYDAY 2 got some new Wick-related content shortly before the film's release; the "John Wick Heists" pack, One heist features you on a rescue mission to get Charon out of Brooklyn after being ambushed by some local thugs, with the other heist set on a yacht Charon gives you information on to help find stacks of money onboard.

♫ You look for me inside the dark
I am the ocean, you are the shark
You hunt me like your last goodbye
Oh, fallen angel of the night... ♫