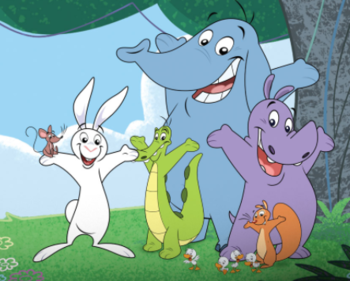 My Friend Rabbit is a show about friendship, particularly the friendship between Mouse and Rabbit. These two buddies and their friends don't think about the past or the future too much, but focus most of their boundless energy on enjoying the moment. The series encourages children to view problems as fun open ended opportunities, accept mistakes, and collaborate with friends.

Qubo began airing an animated children's show based on the book in the Autumn of 2007, and reruns aired on Qubo until March 26, 2017. The show was awarded the Pulcinella Award for Best Preschool TV Series 2008, and the Alliance of Children's Television award for Best Preschool Series 2009. It was also Nominated for 3 Gemini awards for Best Direction (Jason Groh), Best Musical Scoring (John Welsman) and Best Screenwriting (Steve Westren). Steve Westren won the Gemini Award for Screenwriting.

My Friend Rabbit provides examples of: